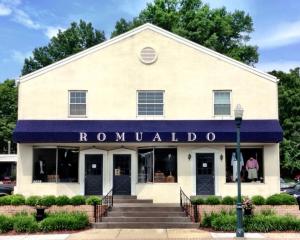 Today’s Feature Friday spotlights one of our retail partners in Ohio: Romualdo. Located in Madeira, the store was founded by Romualdo Pelle in 1968 as a small, Italian tailoring shop. During thirty years of ownership, the “Master Tailor” serviced many distinguished clients—including Neil Armstrong. In 1999, Pelle sold his shop to Trevor and Wendy Furbay who later transformed the store in to a full service haberdashery. Pelle became close friends with Trevor and stayed on in a mentor role. Romualdo has received local coverage in Cincinnati publications and national coverage in The Wall Street Journal online.

Madeira is a suburb of Cincinnati. Named after John Madeira, a man who owned a large piece of land in the vicinity, the city was originally planned in 1871. Madeira is a residential community that is a convenient home for those working in the greater Cincinnati area. The city is known for its charming atmosphere and high quality of life. Recently, BusinessWeek ranked Madeira as one of the “Best Places to Raise Kids—For Less”.

Paul McCartney (above) is one of the many distinguished artists who will receive Dapper Classics socks at the 2014 GRAMMY Awards.

Today’s Feature Friday spotlights one of our retail partners in Michigan: LeConte Fine Men’s Apparel of Rochester Hills. LeConte was established in 1986. For over 25 years, the men’s specialty store has placed a premium on customer service and providing quality, stylish clothing. The shop offers a variety of custom clothing options and carries an impressive collection of accessories and fine sportswear.

Rochester Hills is an affluent community located approximately 30 miles north of Detroit. Before being named Rochester Hills, the city was part of the Avon Township, which was settled in 1817. The town experienced early growth following the completion of a railroad that connected it to nearby cities.  Over time, Rochester Hills grew in to a successful suburban community. The city has been home to numerous well-known people, perhaps none more famous than Madonna who lived there throughout her childhood.

Today’s Feature Friday spotlights one of our retail partners in Virginia: Peter-Blair. Dick Fowlkes opened the store in 1993 with the goal of bringing a style he calls “conservative with a twist” to his hometown, Richmond. Fowlkes co-owns the shop with Ed Cleavenger who was previously the president of Jack Henry Clothing Co., a successful Men’s and Women’s Specialty store in Kansas City, Missouri. Peter-Blair is named after Fowlkes’s two godchildren: Peter Sisk and Blair Northen.  In 2002, Fowlkes and his sister, Kate Ackerly, launched Peter-Blair Accessories, an exclusive neckwear and pocket square line.

Richmond is the capital of the Commonwealth of Virginia. The city was founded in 1737 by Colonel William Byrd II. Richmond was the site of several key events during the Revolutionary War, including Patrick Henry’s “Give Me Liberty or Give Me Death” speech and the passage of the Virginia Statute for Religious Freedom written by Thomas Jefferson. Richmond is home to numerous museums and monuments and also has a thriving arts community. Many movies have been filmed in the city, including Lincoln, Hannibal, and Iron Jawed Angels. The fictional town “Bluffington” in the popular 1990s cartoon Doug is loosely based on Richmond.

As you might have heard, Dapper Classics recently purchased a new linked-toe knitting machine for our fine men’s hosiery. We previously detailed how the style and quality of Dapper Classics socks will improve following our transition to stitch by stitch knitting. In addition to benefiting our products and customers, we believe the new linked-toe machine also promises benefits for the U.S. economy.

We see our investment in a linked-toe machine as an investment in American workers. Purchasing this new machine was an intentional move by Dapper Classics to support American manufacturing and help return production of fine clothing to U.S. shores. Dapper Classics has always claimed a commitment to creating and supporting American jobs. In the past, we’ve put these words in to action by partnering with a third-generation mill. The move to seamless-toe production of our men’s dress socks is an investment in the future of American jobs. Our hope is that the investment in linked-toe knitting will help re-tool U.S. production of fine socks. We want the best products to be made in the U.S.A. Moreover, as one of the only current producers of American-made linked-toe dress socks, we hope to encourage American consumers to keep their money in the United States by purchasing Made In U.S.A. products. When you buy from Dapper Classics, you are not only getting a stylish, quality product; you are also supporting American jobs.

Today’s Feature Friday spotlights Mobley & Sons, one of our retail partners in Alabama. Mobley & Sons is a family-owned business located in Birmingham. The store has been Birmingham’s destination for fine men’s clothing for over 35 years. Mobley & Sons carries a wide selection of quality clothing at a variety of different price points. Visitors to the store will find clothing to fit any lifestyle. The shop was recently voted the “Best Men’s Store” in the area.

Founded in 1871, Birmingham is the largest city in the state of Alabama. Birmingham was named after Birmingham, United Kingdom, and many of its original settlers were of English ancestry. From its foundation to the mid-twentieth century, Birmingham was the South’s primary industrial center. Today it remains one of the major business centers in the Southeastern United States. In the 1960’s, the city was a key site for the civil rights struggle for African-Americans.  Birmingham is home to numerous museums, including the Birmingham Civil Rights Institute.

Today’s Feature Friday spotlights our first retail partner in New Jersey: The Haberdashery at Crookhorns. Michael Crookhorn opened the store in 2009. The Haberdashery at Crookhorns is Upper Montclair’s premier destination for luxury men’s clothing. The store carries premium sportswear, furnishings and accessories, and made-to-measure shirts and suiting. The accommodating staff welcomes after hours private appointments for their valued shoppers.

Montclair Township was founded in 1868. Despite its small size, Montclair has numerous art venues. Last year, Montclair hosted its first annual film festival to promote filmmakers from New Jersey and around the world. Montclair was the setting for some of the stories in the popular television show The Sopranos. Montclair Township is divided in to six distinct commercial zones. Upper Montclair, the second largest commercial zone, is a beautiful community with several parks and nature reserves. Upper Montclair was once home to Buzz Aldrin, the second man to walk on the moon.