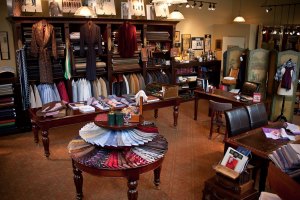 Today’s Feature Friday spotlights our first retail partner in the Northwest: Gian DeCaro. Named after the store’s owner, Gian DeCaro is located in Seattle. Gian grew up the son of a “master tailor” and began tailoring at the age of 16. He opened his Seattle shop in 1990. Gian DeCaro has received positive press in numerous well-known publications—including GQ, Esquire, and Town & Country. GQ named Gian DeCaro “…the best bespoke tailoring West of the Rockies” and “…Seattle’s most elegant elegant custom shop.” Bill Gates is but one of DeCaro’s distinguished customers. In addition to offering a wide selection of classic menswear and expert tailoring services, Gian DeCaro delivers public presentations on the “Art of Dressing Well”.

Seattle is currently the largest city in the Pacific Northwest and one the fastest-growing cities in the U.S. Seattle’s proximity to the Pugent Sound and the Olympic Mountains make it one of the most scenic cities in North America and a popular destination for those who love the outdoors. The city is known for its wet climate and popular tourist spots such as the Space Needle and its local fish market. The so-called “Emerald City” is home to grunge music, the first Starbucks, and the Seattle Seahawks. Earlier this week, the Seattle Seahawks defeated the Denver Broncos to win their first Super Bowl in franchise history.