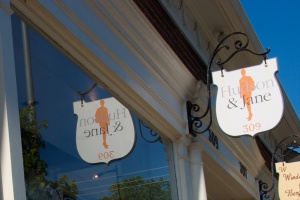 Today’s Feature Friday spotlights our first retail partner in Missouri: Hudson & Jane. After more than twenty years of success in retail, Rick and Flo Ann Brehm decided to open their own store in Kansas City. Hudson & Jane is named after classic styles found in neighborhoods in New York City. Customers can expect a one of a kind shopping experience as they peruse the store’s wide selection of fine men’s and women’s clothing.  Rick and Flo Ann are generous with their fashion expertise and passionate about helping shoppers find their own signature styles.

Founded in 1838, Kansas City is the largest city in Missouri. Kansas City has a variety of popular nicknames, including City of Fountains—for its over 200 fountains—Heart of America—for its central location in the continental US—and Paris of the Plains—for its many boulevards. Kansas City has been home to many famous individuals, including Walt Disney, Amelia Earhart, Ernest Hemingway, and President Harry S. Truman. The city is well known for its jazz and blues music and distinct style of barbecue.