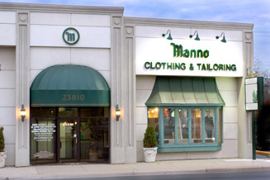 Today’s Feature Friday spotlights one of our retail partners in Michigan: Manno Clothing. A second-generation family business, Manno has been serving the people of Dearborn for over forty years. The shop started in a small 20’x20’ room in the 1970s. Although the store is now approximately ten times its original size, it has not drifted from its original values: “individual service and attention to detail”.  Manno is staffed by five European tailors with over two hundred years of combined experience. In addition to offering a wide selection of men’s clothing, the store hosts quarterly trunk shows for women’s apparel.

Dearborn is part of the Detroit metropolitan area. The city, which was first settled shortly after the Revolutionary War, is known for its ties to the automotive industry. Dearborn was the home of Henry Ford and is the headquarters for the Ford Motor Company. The city also houses the Henry Ford museum, which is the most popular tourist attraction in the Detroit metro area.