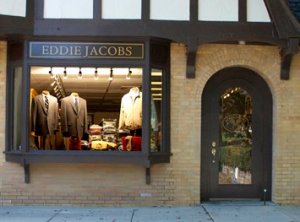 Today’s Feature Friday spotlights one of our retail partners in Maryland: Eddie Jacobs Ltd of Baltimore. Tennis champion Eddie Jacobs opened the store in 1939. Since 1966, Eddie Jacobs, Jr. has run the shop with his partner, Frank Motta, a master tailor from Italy. The store specializes in suits, sports coats, trousers, and fine men’s accessories, including the popular “Eddie Jacobs” necktie—a dark blue tie with a pattern of crossed rackets. The shop, considered Baltimore’s consummate men’s store, has been featured in The Baltimore Sun and The New Yorker.

Founded in 1729, Baltimore is the largest city in Maryland. Baltimore is nicknamed “Charm City” after its hundreds of distinct districts and neighborhoods. During the War of 1812, the city was the site of the Battle of Baltimore, which inspired Francis Scott Key to write “The Star-Spangled Banner”. The historical city has been home to numerous famous individuals, including Billie Holiday, Thurgood Marshall, Edgar Allen Poe, Babe Ruth, and Oprah Winfrey among others.