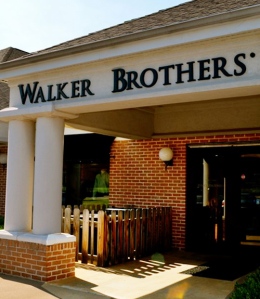 Today’s Feature Friday spotlights one of the oldest menswear shops in Arkansas: Walker Brothers of Fayetteville. Walker Brothers was founded by Digby Walker and his brothers in 1903. Over 100 years later, Walker Brothers remains a family business—now owned by one of Digby’s grandsons and his family. The store carries a wide selection of menswear, from suits to jeans to outerwear, and the friendly staff ensures that each visitor feels like part of the Walker family.

Fayetteville was originally known by the name Washington. However, in 1829, the city was renamed by settlers from Fayetteville, Tennessee. Fayetteville, Arkansas is located in the heart of the picturesque Boston Mountains, a subset of The Ozarks. The city’s scenic atmosphere makes it a popular destination for those who enjoy the outdoors. Fayetteville is known as “The Track Capital of the World” for being home to the 41-time National Champion University of Arkansas Track Team.