Today’s Feature Friday spotlights one of our retail partners in Ohio: Jax Store for Men & Women of Avon. Jax was founded in 1951 in nearby Lorain, Ohio. The shop remained in Lorain for over 50 years before moving to its current location in 2005. Originally a men’s store, Jax started carrying women’s clothing in the late 1980s. Nowadays, Jax is primarily a women’s store, but it still offers a small selection of menswear. The shop provides free tailoring services for men’s and women’s clothing purchased in store.

Avon is located in northern Ohio just west of Cleveland and near the shore of Lake Erie. Home of Duck Brand duct tape, Avon is the self-proclaimed “Duct Tape Capital of the World.” For the last 10 years, Avon has celebrated its heritage with a duct tape festival. This year’s festival attracted approximately 40,000 people—nearly twice the city’s population. The festival’s website says the event “celebrates duct tape, its enthusiasts and its wacky and fun uses.” 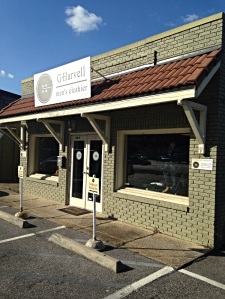 Today’s Feature Friday spotlights G. Harvell Men’s Clothier of Mobile, Alabama. The shop opened in 2002 and is owned by Mr. and Mrs. Harvell, a husband and wife team. The store carries formal and casual wear from a variety of popular brands. G. Harvell is a service-driven business. The accommodating staff makes home and office visits to meet the sartorial needs of their valued customers.

In 1702, Mobile was founded as the first capital of French Louisiana. The city would later belong to Britain and Spain before becoming part of the United States in 1813. Mobile’s diverse heritage makes it one of the most culturally rich cities in Alabama. Mobile is known as the birthplace of Carnival and Mardi Gras in the USA. Mobile’s location on the Gulf Coast and its numerous museums and historical sites have made the city a popular Alabama tourist spot. 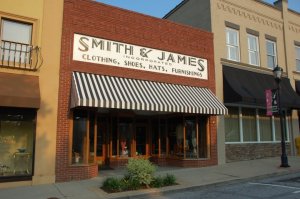 Today’s Feature Friday spotlights our first retail partner in South Carolina: Smith & James. Smith & James was founded in 1916 under the name Smith & Vaughn. The announcement of the store’s opening in the Greer Observer described the shop as an “exclusive up-to-date Gent’s furnishings store.” The shop became known as Smith & James in 1919. Since its opening, the store has been an important part of the Greer community. Smith & James carries a wide variety of styles—from boardroom to weekend wear—and the staff provides wardrobe consulting to help customers achieve their perfect fit and style.

Prior to the Revolutionary War, the area now known as Greer was part of the “Domain of the Cherokees.” The area was added to South Carolina in 1777. Greer was founded nearly 100 years later, in 1876, as a result of the booming railroad industry. Greer is a quaint city in upstate South Carolina situated between the larger Greenville and Spartanburg. Greer was the childhood home of Bill Haas, PGA Tour player and winner of the 2011 FedEx Cup.