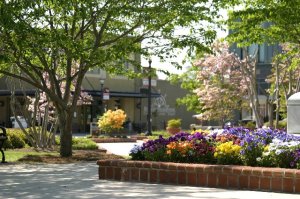 Today’s Feature Friday spotlights our first retail partner in The Sunshine State: John Isaac’s Clothing of Gainesville, Florida. John Mitchell opened the store in 2008. The shop’s name is a tribute to the two men who helped Mitchell realize his dream of owning his own business: John (his father) and Isaac (his grandfather). The store carries an expansive selection of menswear—ranging from casual clubhouse wear to custom made suiting. John Isaac’s offers numerous services, including a “closet clean up” where a staff member will provide advice on what should stay or go from your closet, tailor ill-fitting clothing, and recommend new clothing that fits your personal style.

Gainesville is located in north central Florida. Founded in 1853, Gainesville experienced growth throughout the 19th century as a successful agricultural community. The city’s population further accelerated at the turn of the 20th century following the opening of the University of the State of Florida (later renamed the University of Florida). In recent years, Gainesville has received a wide variety of accolades: it has been ranked one of the “Best Places to Live and Play” in the USA; selected the healthiest community in America; and named the “Best Place to Start a Band in the United States”. (image credit)